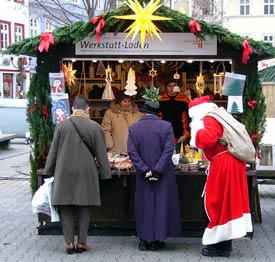 Contrary to what you might think, Germany is one of Western Europe's more affordable destinations, and it's an even better bargain during Advent. "Warum?" you might ask, and the answer is simple: In the weeks leading up to Christmas, you can dine on sausages, spiced wine, and other street food in Germany's Weihnachtsmärkte and Christkindlmärkte instead of running up bills in restaurants.

The treats on offer vary from region to region. For example, Münster--which is near Germany's border with the Netherlands--offers potatoes and other goodies that appeal to Dutch visitors, while many of the Glühwein vendors in Lübeck--a port for ferries from Scandinavia--promote Swedish-style mulled wine or Glögg. Sausages also differ from town to town: In Erfurt, locals gorge on huge Thuringian sausages served in long buns, while in Regensburg, the preferred sandwich consists of two or three small Nürnburg-style Bratwürste on a round hard roll. And in Lübeck, sausage is typically served on a plate with bread on the side.

Our German Christmas Markets article describes the holiday-market scene in half a dozen cities scattered around Germany. It also includes links to other resources, including a long list of Christmas markets from the German National Tourist Office.

Editor's note: For hundreds of pages of travel-planning information about German cities and towns, see Europe for Visitors: Germany.