With a GRT of 30,000 tons and accommodations for 540 guests, Silver Spirit is the largest vessel in Silversea's fleet. It also has the largest suites of any Silversea ship, and 95 percent of the suites have private verandas. Other features include six dining venues, a large indoor-outdoor spa, and a supper club with all-night entertainment for passengers who don't mind sleeping during sea days or while the ship is in port.

For more information on Silver Spirit and the five other ships in Silversea's ultra-luxury cruise fleet, visit www.silversea.com.

Got €1200 to spare? Attend a masked ball during Venice's Carnival. 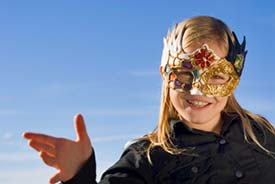 We aren't big fans of Venice, Italy's Carnival, which is less a Venetian tradition than a modern-day commercial reenactment of an 18th Century forerunner to Spring Break. In essence, the Carnivale de Venezia celebrates the decline and fall of the Venetian Republic (which ended when Napoleon Bonaparte shut down the party by conquering Venice in 1797).

Still, huge numbers of tourists love Carnevale, and if you're among them, you can play dress-up with the other visitors who rent costumes, attend masked balls, and try to get into character as dissolute Venetian aristocrats in the 10 days that lead up to Shrove Tuesday and Lent.

For example, you could pay up to €1200 for an evening at Il Ballo del Doge, which the organizer (Antonia Sautter) has titled "7 Dreams / 7 Sins." Ms. Sautter's publicist writes:

"The doors of the prestigious Palazzo will open before the guests, a palazzo which contains a unique universe inhabited by magical, exotic, transgressive, mythical and fantastical creatures, from dancers and acrobats, artistes and musicians, singers with sublime voices, actors from the Commedia dell’Arte and courtesans, Casanova himself and many, many others….Guests, dressed in sumptuous period costumes, will experience a single timeless dream immersed in the magical light of a thousand candles and in the enveloping atmosphere of the frescoes by Guarana and Tiepolo. The decorations will be dazzling, the floral arrangements magnificent, the table decorations sumptuous, while the gala dinner will be the height of refinement. Over one hundred spectacles will animate this magnificent party which, with the passing of the hours, will transform into the triumph of love ending as it will at first light of St Valentine’s Day.

A sumptuous period ball obviously requires a costume, but you needn't pack a period gown or a Plague Doctor uniform in your carry-on. The press release continues:

"This exceptional event is known worldwide also for its spectacular and unique costumes, produced each year by Antonia Sautter in her Atelier Venetia, where she keeps over one thousand, from Medieval style to the 1920s. Her creations are each absolutely unique, sewn and decorated strictly by hand with rich decorations, lace, ribbons and embroideries in precious brocades, silks and velvets."

Prices for dinner and dancing range from €1000 to €1200, but you can get in for a mere €500 if you're willing to skip dinner and arrive after 11 p.m. For details, visit Signora Sautter's www.ilballodeldoge.com. To learn more about Carnevale di Venezia, please see our articles about Venice Carnival and Venice Carnival Masks.

Travel by ship between Istanbul and Sevastopol 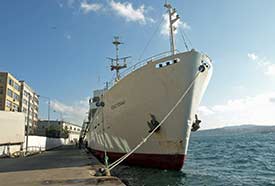 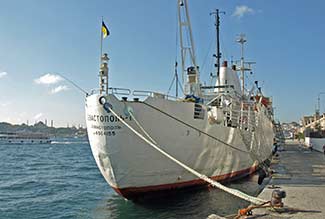 ABOVE: MV Sevastopol 1 at Karakoy Pier in Istanbul, Turkey.

While visiting Istanbul during a recent MSC Poesia Eastern Mediterranean cruise, we were intrigued by a small cargo and passenger ship that was moored behind ours at the Karakoy Cruise Terminal. We did a little research and discovered that the MV Sevastopol 1 offers a weekly service between Istanbul and the Black Sea port of Sevastopol, Ukraine. The voyage lasts 35 hours, and you can buy tickets from E.G.S. Shipping.

We haven't sailed on the Sevastopol 1, so we can't comment on its shipboard experience, but the hull was in decent shape and the ship's lines were pleasantly old-fashioned. If both Istanbul and Sevastopol are on your vacation itinerary, a passage between the two cities on Sevastopol 1 might be worth considering. (If you do go, please use the comment form to report on your experience!)