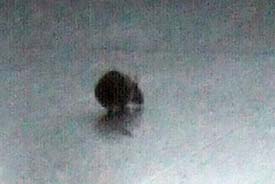 ABOVE: This Dutch rodent, like alleged terrorist Umar Farouk Abdulmatallab, had no trouble getting past Schiphol Airport security. (The snapshot was taken before a flight from AMS to London City Airport.)

The term "security theater" is often used to describe screening of passengers at airports. Amsterdam's Schiphol Airport puts on a bigger show than many of its competitors do, with long check-in lines at gates for U.S.-bound flights so that squadrons of plainclothes security officers can bombard passengers with questions like "Who packed your bags?" and "Did anyone give you anything to carry on board?"

Unfortunately, the recent incident on Delta's Flight 253 from Amsterdam to Detroit showed that the security officers were asking the wrong questions. Perhaps "Do you hate America" would have been more effective--or, in a tribute to Mae West, "Is that a stick of dynamite in your pants, or are you just happy to see me?"

We can now expect even bigger security-theater productions at Schiphol and other airports, thanks to the ill-fated explosive device that Umar Farouk Abdulmatallab reportedly had taped to his thigh. Our suggestion: Require bit players, a.k.a. passengers, of both sexes to wear skirts. Trousers can make it hard to search for contraband, but it's easy enough to check whether a flying Scotsman really is wearing nothing under his kilt.