Climb a "via ferrata" in the Dolomites 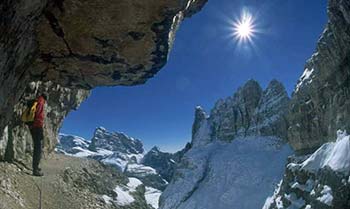 ABOVE: A climber in the Dolomites enjoys a spectacular view.

Dolomite Mountains, an adventure-travel company based in the province of Belluno, Italy, is offering a unique mountaineering experience for anyone in good shape who has a head for heights: Clients can climb a "via ferrata," or "iron road," in the rugged Dolomites of Northern Italy. 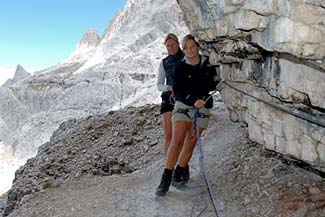 "A via ferrata is a mountain route which is equipped with fixed cables, ladders, and bridges. The use of these allows otherwise isolated routes to be joined to create longer routes which are accessible to people with a wide range of climbing abilities. It is a different way of enjoying the sheer magnificence of the awesome Dolomite environment--travelers will be stopped in their tracks by amazing views and mountain situations.

"Many via ferratas were originally built to aid movements of alpine military units during the First World War, and now (although they also exist in Germany, Austria, France and Switzerland) they represent one of the major attractions in the Dolomites. They are, in effect, a range of protected routes, comprised of fixed cables, ladders and even gorge-spanning bridges, which aid ascent to places normally reserved for expert rock climbers. Routes are graded according to difficulty.

"Via ferrata climbing is suitable for anyone not afraid of heights who wants to experience the Dolomites in a different way. Cables and ladders aid even the non-expert climbers to do beautiful via ferratas. There are many ferratas of different difficulties so everyone can do what suits best.

"Probably the most unusual via ferrata in the eastern part of the Dolomites is VF Lagazuoi Tunnels. Fighting for control of Mount Lagazuoi in World War I, Austrian and Italian troops built a series of tunnels through the mountains. The aim of each side was to tunnel close to the enemy and detonate explosives to destroy their fortifications. Some of the tunnels have been restored, with a via ferrata following the route of one of these. It is now possible to descend into the mountain by following the VF Lagazuoi Tunnels route."

What to expect during your climb:

"'We supply simple mountaineering equipment such as a harness, helmet, some rope and a few karabiners,' says Agustina Lagos Marmol, founder of Dolomite Mountains. 'Your guide will teach you how to use the equipment and give you hints on climbing techniques in complete security. Trips are adapted to clients' abilities, and our local guides will show not only the beauty of the mountains but the history of the area though the via ferrata as they were built during WWI.'"

About climbing in the Dolomites:

"Around 1850, English mountaineers began to appear in the Ladin valleys. Their journeys took them several days on foot and their destinations were the imposing rock faces and peaks of the Dolomites. From 1870 onwards, train connections and large hotels attracted the nobility who, without exerting themselves too much, could restore themselves with the pure mountain air and the alpenglow.

"The inhabitants of the Dolomite valleys found themselves at the service of the guests in various ways: as hotel personnel, as mountain guides, and in other roles. Some of them soon started their own businesses and, around 1900, began to teach new winter sports to their guests.

"After 1945, tourism became the most important business sector in the Dolomites. Today, the Dolomites are famous for skiing in the winter months and mountain climbing, daily excursions, climbing and Base Jumping, as well as paragliding and hang gliding in summer and late spring/early autumn. Free climbing has been a tradition in the Dolomites since 1887, when 17-year-old Georg Winkler soloed the first ascent of the pinnacle Die Vajoletturme."