ABOVE: Piz Gloria, the villain's headquarters in On His Majesty's Secret Service, is featured in the "Bond, Bourne and Beyond" tour.

Theme Party People and Globus tours are collaborating on an 11-day tour of James Bond and other film locations in France, Italy, and Switzerland this summer.

The tour begins in August 21 in Venice, with visits to locations that were used in From Russia with Love, Moonraker, and Casino Royale. Next comes a drive to Cortina d'Amppezzo (For Your Eyes Only), followed by Lake Como (Casino Royale, Star Wars: Attack of the Clones, Oceans 12)

From Italy, the tour moves on to the Verzasca Dam in Lorcarno, Switzerland (Goldeneye), the Furka Pass (Goldfinger), and the alpine region around Interlaken, including dinner at the Piz Gloria mountaintop restaurant that served as Blofeld's lair in On Her Majesty's Secret Service.

After a drive to Geneva, tour members board the TGV for a high-speed train trip to the French Alps around Chamonix (The World is not Enough) and on to Paris (A View to Kill, Ronin, Charade). During the three-night Paris stay, the tour will include visits to movie locations within the city and at French chateaux in the surrounding countryside.

The tour price is US $3,995 (air not included). For a detailed itinerary and other information, see the Bond Bourne and Beyond: EURO2010 page at www.themepartypeople.com.

Our Venice travel and dog blogs 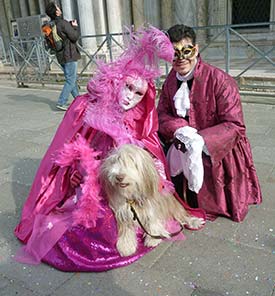 ABOVE: Maggie the dog at Venice's Carnival.

In the past week or so, we've been distracted by the challenges of moving to Venice, Italy for three months--and when we say "we," we're referring not only to us, but also to our dog Maggie, who's the subject of a new blog titled "Maggie in Venice: A Bearded Collie's Adventures in Italy." (The blog is well worth reading if you've ever thought of traveling abroad with a pet.)

Our other, non-canine Venice blog may be of interest if a Venetian vacation is on your calendar for 2010. You'll find it at VeniceTravelBlog.com, where it serves as a complement to our Venice for Visitors travel-planning site.