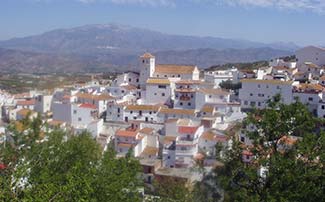 ABOVE:  Bambú is down the road from Iznate, the Anadalucian "white village" in the photo. INSET BELOW: Sue and Cath, Bambú's owners, take a break by the pool.

We recently received an e-mail from Catherine Potter, a British expat who--with her partner Susanne--has opened Bambú, a small self-catering resort hotel for lesbians in an Andalucian village about 30 minutes from Malagá. With Cath's permission, we're sharing her story for the benefit of women readers who may be interested in an alternative to the usual package-holiday locales along Spain's southern coast:

"After years of participating wholeheartedly in the rat-race, raising children, seeing them off to university and contemplating another 20 odd years of ploughing the same 9-5 furrow, the opportunity to escape seemed too good to miss.

"Susanne and I had embarked on the adventure of acquiring a holiday villa in Spain some 7 years earlier (and it truly was an adventure...but that’s another story!). Our villa was a place to enjoy holidays with the kids but never a home. But we always loved Spain. Not the costas, where the Brits and other northern Europeans enjoy their annual two weeks in the cultural no-go-zone of a package holiday. But the real Spain. And yet just as close to the airport and beaches as any of the package destinations.

"Iznate is a charming quintessentially Andalucian white village. The locals expect us to learn Spanish and not the reverse. It’s not as sophisticated as Britain, that is if our rat-racey lives can truly be called sophisticated. Their main occupation is farming--traditionally raisins, used to make a divine brew called Malaga Dulce. Increasingly the land is being turned over to avocados and mangos--perhaps things are getting a little more sophisticated!--but it’s still farming all the same.

"The seaside towns around here are a million miles away from Marbella or Torremolinos. They don't appear in any package-holiday brochure. These places are where the Spanish come on holiday. And boy, do they know how to enjoy themselves! It all seems to revolve around eating!

"Andalucia doesn’t just have amazing weather (all year round). It is also blessed with stunning scenery--mountain range after mountain range, tailing off into the sea. It is drop dead beautiful. And then there is the culture, the history.

"This place was seriously important in the history of Europe, Christianity, Islam and even Judaism. Living here, being able to imbibe the history of Andalucia is intoxicating. Andalucia's four great cities are right up there in the ranks of all the great cities of Europe. Seville’s Alcazar and Giralda are stunning. Cordoba was once the largest city in Europe and a hotbed for scholarship, noted for its tolerance across all religious groups. Granada, the last stand of the Moors, is home to the most celebrated Muslim palace in the world. And Malaga City has its share of delights, with its Roman Ampitheatre, Alcazaba and Gibralfaro, not to mention its more recent claim to fame as the birthplace of Picasso.

"So we got the bug--Andalucia became a home from home--and when the kids flew the nest that was it. But how to make a living in Spain when one’s lingo is far from fluent? You've got to create your own way in life. Enter Bambú! 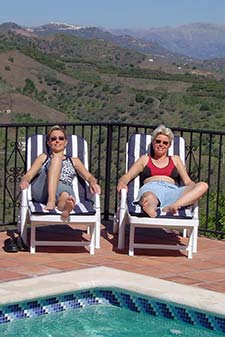 "We fell in love with the place as soon as we saw it. The moment we returned to the UK our house went up for sale. Bambú is perfectly proportioned and situated for a small hotel. We now live at what was our holiday home in Iznate and commute the 10-minute drive to Bambú on the outskirts of the next village along, Benamocarra.

"Prior to bringing up the children we regularly used to take our holidays in lesbian establishments--in Key West (yes, we loved Pearl's or Rainbow House as it was then) and at many places throughout the UK. It engenders such a sense of freedom and relaxation that a mainstream hotel never can, however 'gay-friendly' it might be.

"We had a vision for our lesbian oasis and in pretty much every respect Bambú fitted the bill. Prior to its new life as a lesbian centre for relaxation and sun-worshipping, Bambú was a large but simple finca--indeed, apparently some years ago it doubled as the hostelry where all the local farmers stopped by for lunch.

"We knew we needed seclusion--if we were to create a lesbian oasis, it had to be away from prying eyes. And Bambú’s nearest neighbour is ½ km away. But don’t get me wrong--this is not some place for debauchery. It is a respectable establishment where our guests can feel fully at ease to be themselves--nothing more!

"We knew the location and its views had to be sublime--and with 360-degree views from the Montes de Malaga to the Sierra Tejeda  to the coast at Torre del Mar, the panorama from Bambú is simply breathtaking.

"Having always enjoyed self-catering holidays ourselves, we wanted to offer not just bedrooms but fully self-contained suites for our guests. The finca that was to become Bambú was perfect for such a transformation. We managed to create seven generous double or twin suites from reorganising the interior of the finca--each with its own kitchen, bathroom, front door and outside seating area.

"The exterior of Bambú was perfect too, with spacious terraces around much of the finca. There was plenty of room for a large pool, communal areas, a central bar and barbecue, and many private corners. And so, after many months of a stressful and occasionally nightmarish  renovation project, Bambú was born...exactly as we had envisaged.

"We have always been fairly exacting and demanding customers when it has come to the holidays we have taken.We expect style, quality, good housekeeping, accessibility and a great location. And we have made the same demands of ourselves in developing and running Bambú.

"One day we’ll write a novel about the whole experience...but right now we just want to share it with you. Calling all lesbians, from near and far, come and enjoy this little paradise we have created.We have only just opened, and 2010 is Bambú's inaugural year. Come help us christen Bambú. One day we hope to be as famous as Pearl's!  Isn’t it about time we Europeans started to learn to enjoy ourselves as much as our American sisters? Exclusively lesbian hotels are the future--places where we can truly relax and be ourselves. Come share it with us."

For more information about Bambú, visit Sue and Cath's Web site at www.bambu-resort.com.