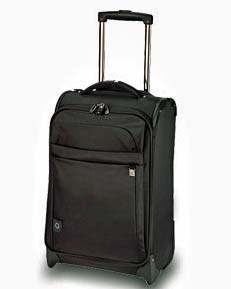 Not long ago, we received a press release from Antler Ltd, a long-established British luggage manufacturer that has been expanding into international markets. The release featured Antler's "Size Zero" collection of wheeled upright bags, which use high-tech construction techniques to to minimize luggage weight so travelers won't get whacked by the airlines' increasingly Draconian excess-baggage fees.

Such fees shouldn't be taken lightly, if you'll excuse the play on words: Condé Nast Traveler's "Ombudsman" column recently described the plight of a family on an international flight who were charged a staggering US $6,000 for 152 pounds or 69 kg of excess luggage. 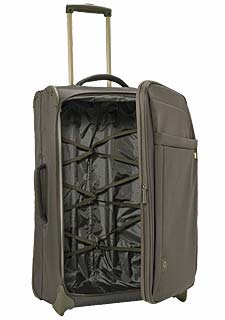 Antler's Size Zero 22" upright weighs only 5.3 pounds or 2.4 kg, which is about 60 per cent of a comparable 22" upright's weight. Even the monster 30" size, which is best used for cruising or car travel, weighs only 7.3 pounds or 3.3 kg empty. That's remarkable for a well-made bag.

(Note: We recommend avoiding cheap suitcases that are light only because of their shoddy construction--e.g., easily-squashed cases that consist mostly of fabric with a metal hoop and a bit of plastic at the corners to give the illusion of structure.)

Antler Ltd. has promised to send us a 22" upright for examination, field testing, and a detailed review at Europeforvisitors.com. In the meantime, you can learn more about the company's Size Zero and other collections at www.antler.co.uk or www.antlerusa.com.

August, 2011 update: Since publishing this item a year ago, we've used the 22" Size Zero ourselves on several trips. The bag's light weight has been a blessing, but the locking mechanism inside the telescoping handle broke on the third trip, and the handle now telescopes only halfway.

We aren't "recommending" the bag; we're stating the facts and letting our readers make their own decisions. In this case, one of the facts (as described in the August update that you read) is the breakage of the handle. We mentioned this both here in our blog and at the end of the "field report" in our three-page review at Europe for Visitors:

If this bag inst very sturdy and has broken only after the third use, how can you recommend this item? There are countless bags on the market that will surely be light weight and not break so easily.