Home Archives & Categories Europe for Visitors Europe for Cruisers
Holy foreskin! AN IRREVERENT CURIOSITY is now in paperback.
Put a "Paper Wallet" in your pocket

Berlin organist meets his match during the World Cup final 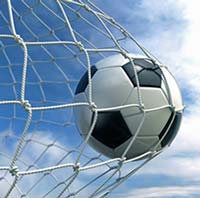 In Berlin, God moves in mysterious ways--or maybe he just has a better marketing team than he does in Hannover or Holyhead.

On July 11, the Emmaus-Kirche in Berlin's Kreuzberg district will present the ultimate installment of its Organ and Football series as organist Stephan von Bothmer supplies an improvised, silent movie-style accompaniment to the televised final match of the 2010 FIFA World Cup.

This won't be the organist's first flirtation with soccer in the shadow of the sacristy: The Emmaus-Kirche's Orgel und Fussball series dates back to the European Championships of 2008, and the Netherlands-Spain final will be the fourth match to be accompanied by Stephan von Bothner's musical commentary during the current Weltmeisterschaft tournament.

(We should note that the Orgel und Fussball idea was hatched by Ingo Schultz, cantor of the Emmaus-Church Community, who also organized the event.)

The show begins at 8:30 p.m. Admission is free, and drinks (both alcoholic and non-alcoholic) will be available in the church café. For more information in German, visit www.orgel-und-fussball.de.