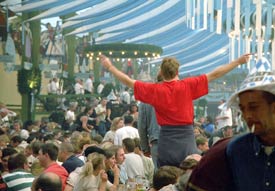 ABOVE: A colorful Bavarian leads a Hippodrom crowd in a chorus of "Ein Prosit."

My PR contacts and former drinking buddies at Munich International Airport have alerted me to something I hadn't known until today: 2010 is the 200th year of Munich's fabled Oktoberfest.

Mind you, the first Oktoberfest was a bit different from the monster beer bash that the festival has become. The event began in 1810 as a wedding celebration for Crown Prince Ludwig of Bavaria and Princess Therese von Sachsen-Hildburghausen. Everyone had so much fun at the reception that the party was repeated annually, minus the priest and nuptials.

Today, Oktoberfest goes on for more than two weeks, during which time 6 million visitors guzzle some 6 million liters (1.5 million gallons) of special Oktoberfest beer. In addition to the 14 beer tents or festival halls, Oktoberfest has more than 200 carnival rides, sideshows, and other attractions. (It also has hundreds of police and security guards to keep drunks from making nuisances of themselves).

Even if you aren't a frat boy with a fetish for keggers, you're likely to enjoy Oktoberfest. This year's festival runs from Friday, September 17 through Monday, October 4.

For more information, including links to other resources, read our Oktoberfest article in the Munich section of Europeforvisitors.com.

Posted at 09:04 PM in Destinations, Events and festivals | Permalink | Comments (0)