ABOVE: The river vessel Katharina von Bora (shown here in Dresden, on the Elbe) is now operated by Nicko Tours.

When Peter Deilmann Cruises exited the river-cruising business in 2009, many former Deilmann cruise passengers (including us) were disappointed by the news. Fortunately, a number of Deilmann's comfortable and well-equipped ships are now owned by Nicko Tours, a Stuttgart-based company that has catered to German river cruisers for nearly two decades.

Some Nicko Tours vessels (like the Katharina von Bora, shown above) offer German-only cruises, but 10 of the company's 28 ships "are equipped for bilingual on-board life" (to borrow a phrase from Nicko's Web site), with announcements, menus, daily programs, etc. in both German and English.

Excursions that are included in the cruise package have bilingual guides, while optional excursions are bilingual if at least 25 passengers who prefer English have booked such tours in advance.

For more information on the company's cruises and ships, visit www.nicko-tours.de.

PHOTOS: Hook your PodFlexPro over a closed tray table (above), or turn it into a pyramid on your open airline tray (inset below).

On a recent Lufthansa transatlantic flight that featured two kids' movies and a selection of forgettable TV shows on overhead monitors, I envied the passengers around me who were able to view their own inflight entertainment on laptops, iPod Touch players, or other electronic devices. And if I ever bite the bullet and spend money on an iPod Touch or smartphone, I'll consider tucking a PodFlexPro into my backpack.

PodFlexPro is a neoprene electronic device holder with a difference: Like its competitors, it protects an iPhone, or iPod Touch, or compatible Android smartphone with a sleeve that has a clear viewing window. But it does more than that: By bending a strap with a "micro-mesh frame" and hanging it from a closed tray table, you can turn your iPhone or iPod Touch into a seatback video player. Or, if you prefer, you can bend the PodFlexPro into a pyramid shape (see inset photo) and place it on an open tray table.

When you aren't traveling, you can use the PodFlexPro during cardio workouts at the gym, on your desk at work, or on a table at mealtimes when you're eating alone.

The PodFlexPro sells for US $24.95, with an additional $7.95 for shipment to addresses in the United States, Canada, the UK, Australia, and Belgium. For more information, visit www.podflexpro.com. 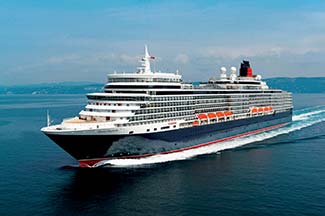 ABOVE: Queen Elizabeth during sea trials in September, 2010.

Cunard Line has taken delivery of its new Queen Elizabeth, which is the second-largest Cunard liner ever built at 92,400 GRT. The vessel left the Fincantiere Monfalcone shipyard on September 30 for a leisurely journey to Southampton, where it will berth at the Ocean Cruise Terminal on October 8.

The Queen Elizabeth's maiden voyage begins at 5 p.m. on Tuesday, October 12. The 13-night cruise will take passengers to Vigo (in Northern Spain), Lisbon, Cádiz, the Canary Islands, and Madeira before returning to Southampton.

After that, the ship will cruise several different itineraries, such as a 5-night "short break" to Amsterdam, Zeebrugge, and Le Havre and an 18-night Mediterranean cruise that will call at ports such as Venice, Dubrovnik, Valletta, and Gibraltar.

For more information about the new Queen Elizabeth and other Cunard ships, visit www.cunard.com