Airport body scanning: going too far, or not far enough? 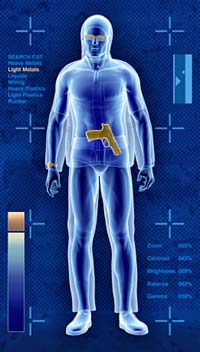 In a TV report that pooh-poohs the public anger over radiation-emitting body scanners and intrusive pat-downs in American airports, ABC News claims that most American travelers won't be affected by the TSA's new rules because U.S. airports have only 385 body scanners for 2,100 security lanes.

At the same time, the TSA's administrator and walking PR disaster, John Pistole, is claiming that body scanners and groping are "essential" to prevent terrorists from blowing up airplanes.

Am I the only one who sees a failure of logic here? If airplanes can't be protected without irradiating or groping passengers, why are fewer than 20 percent of U.S. airport security lines equipped with body scanners or staffed with TSA employees who have been trained in crotch and bra checks?

Is the TSA assuming that all would-be terrorists will choose the more stringent security lines?

Wouldn't it make more sense to inflict abusive pat-downs on all passengers who aren't being offered free full-body X-rays?

Update: New Scientist explains why body scanners could cause cancer. (In a nutshell: by separating or unraveling DNA strands).