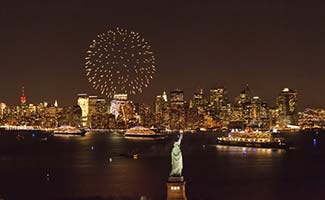 ABOVE: It's win, place, and show as the Statue of Liberty gives a wave of encouragement to Cunard's three-ship fleet.

On January 13, 2011, Cunard Line's newest ship--the Queen Elizabeth--got a fireboat-and-fireworks tribute from the Port of New York. Thousands of well-wishers watched from shore as the new vessel passed in review with Cunard's Queen Mary 2 and Queen Victoria as escorts.

According to the cruise line, the meeting of the Queens marks only the second time in Cunard’s 171-year history that all three of the company’s ships have met simultaneously in New York.

Cunard's PR department writes: "Most recently, Queen Elizabeth captured the world stage with her Royal Naming Ceremony on 11 October 2010, attended by Her Majesty The Queen in Southampton, England.  Following her maiden call to New York, she embarks on her Maiden World Voyage (103 days), while flagship Queen Mary 2 begins her fifth World Voyage (103 days) and Queen Victoria begins her debut Americas Season, traversing between the east and west coasts through the Panama Canal."

For more information about Cunard Line, its ships, and its transatlantic and cruise itineraries, visit www.cunard.com or see the Cunard Line page in our European Cruise Guide 2011 at Europe for Cruisers.