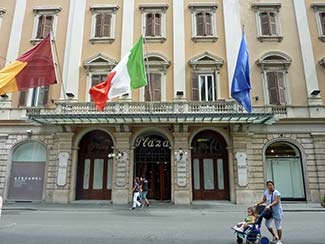 ABOVE: Prepare to spend another six euros per night for a double at this hotel in central Rome.

Venere, our hotel booking partner, reports that the city of Rome has just added a tax on hotel rooms. (The details of the tax were announced at the last minute.)

According to Venere, the new tax will be added to the guest's bill at the time of check-out.

The tax rates are as follows (per person, per night):

Although Rome's hotel tax is annoying, it's hardly unprecedented: Such taxes are common in the United States, for example, and in Switzerland, a Kurtax is often added to hotel bills.

We're a little surprised, however, that a guest at a 500-euro-per-night luxury hotel pays only one extra euro in tax compared to a guest at a budget bed-and-breakfast. Still, hostels are exempted from the tax, so maybe we'll see a spate of hotel-to-hostel conversions in the months ahead.

Note: If you think the hotel tax is being used to upgrade Rome's tourist infrastructure, think again. According to a Business Week article, the tax was proposed by the Berlusconi government as a means of raising revenue at a time when national subsidies are being cut. To put it another way, tourists are helping to pay Rome's bills so that local voters won't be hit with tax increases.