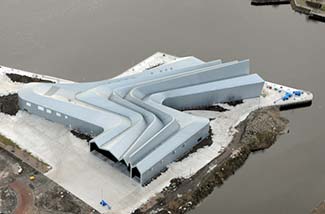 ABOVE: An aerial rendering of Glasgow's Riverside Museum on the River Clyde.

The Museum of Transport has long been Britain's second most visited transportation museum. On June 21, the museum's collection of 3,000 objects is moving to a new home: the Riverside Museum on the River Clyde, which will be "a celebration of Glasgow's engineering heritage and its citizens' global influence through trade, transport, and technology."

The new Riverside Museum will include exhibits such as:

The Riverside Museum's Web site should be online by the time the new building opens, but in the meantime, the museum is trying to raise the final 1 million pounds in a £5,000,000 fund drive at www.riversideappeal.org.

Here are two more photos to show what you can expect to see if you visit Scotland's new Riverside Museum of travel and transport in late June or beyond: 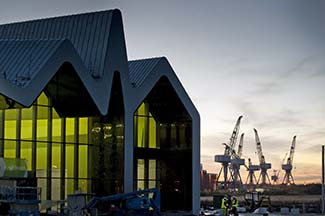 ABOVE: The facade of the Riverside Museum on Glasgow's River Clyde, with maritime cranes in the background. BELOW: The 19th Century sailing ship Glenlee. 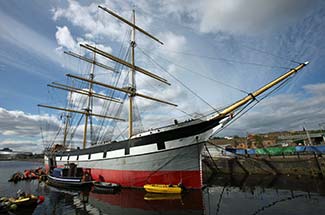