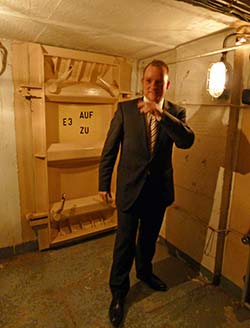 ABOVE: A museum official shows off the airlock in the former State Security Service bunker near Leipzig, Germany.

The Museum im Stasi-Bunker, a.k.a. the Museum in the Stasi Bunker, offers an intriguing glimpse into life in the former German Democratic Republic.

The restored underground command post, which was designed to house 120 Stasi officers and two KGB liasons during an attack by NATO, occupies a wooded setting about 30 km or 19 miles from Leipzig, Saxony. During its heyday from 1972 to 1989, the site had a cover story: The GDR's powers-that-were claimed that it was a holiday retreat for Leipzig water and sewer workers.

For a two-page illustrated article about the bunker, which is open to the public once a month, see our Museum in the Stasi Bunker article in the Germany section of Europeforvisitors.com.