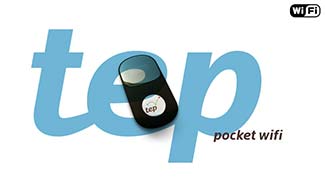 In the article, I mentioned that I'd be field-testing the tep pocket wifi in Italy, and the results are now in.

The good news: The tep pocket wifi connected to the Wind cellular network in the three cities of Northern Italy that I visited.

The bad news: Although my laptop recognized and connected to the tep pocket wifi, I had no access to the Internet.

At first I thought there might be a problem with my laptop's network settings, but on reflection, that seemed unlikely because I was able to reach the Internet with three different hotel Wi-Fi networks and the city of Venice's public Wi-Fi network during my trip.

I e-mailed Tep's support address with a description of the problem, but I never got a reply.

To add insult to injury, it cost me US $34 to send the unit back to London from the United States after my trip. (I could have used the business-reply envelope that Tep provided for returns from locations within Europe, but I wasn't willing to entrust an uninsured $200 device to Italy's much-maligned post office.)

Bottom line: The tep pocket wifi is a great concept, but my experience suggests that tep's Internet roaming service may not work for everyone. If you've used the tep pocket wifi or other private-label versions of the Huawei Mobile Wifi, feel free to post a comment below. 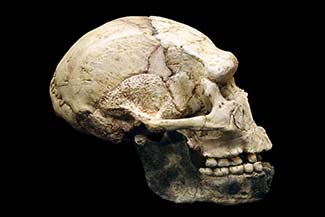 ABOVE: The skull of the 450,000-year-old "Man of Tautavel," the oldest known human remains in France.

Not many Anglophones are aware of the Tautavel Museum of Prehistory in southeastern France, and that's a pity: The museum, which houses the European Center of Prehistoric Researches, boasts of being the most-visited archaeological museum in France, thanks in part to the local discovery of the 450,000-year-old "man of Tautavel" (top photo) in 1971.

This summer, the Tautavel Museum will once again run a program of prehistoric animations, treasure hunts, hikes, visits to the excavations of the Caune de l'Arago where the "man of Tautavel" was found, and other activities.

The most important events of the summer are scheduled for late July and early August. An English-language document from the museum explains:

"The high point will take place from 19 to 20 July and from 9 to 11 August with the 20th Celebrations of the Prehistory: visitors can learn about various prehistoric techniques (make of the fire, to cut stone tools, to make some music, to discover the prehistoric cooking), or discover stands of local products, as well as exhibitors of minerals and fossil. A prehistoric meal will punctuate every party.

"Finally a free show, " On the Tracks of the man of Tautavel " mixing theater, sound and light, will be presented."

BELOW: A demonstration of how prehistoric humans made fire, and the scenic Gorges de Gouleyrous just north of Tautavel. 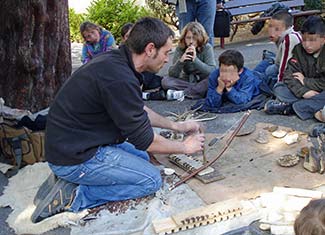 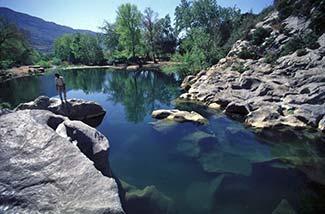 Posted at 06:48 PM in Destinations, Events and festivals | Permalink | Comments (0) 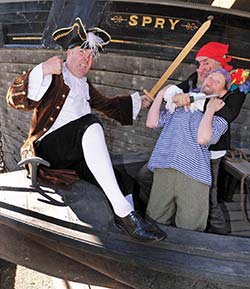 The open-air museum's "Treasure Island Weekend" will take place on Saturday, July 30 and Sunday, July 31, 2011, and visitors are encouraged to dress up as pirates or other characters from Treasure Island.

The last remaining Severn Trow, a type of cargo boat that operated along the River Severn in the 1800s, will be transformed into the pirate ship Hispaniola, with Long John Silver and Jim Hawkins on hand to judge the best fancy dress costume.

Treasure Island Weekend is one of many days out, exhibitions, and festivals in 2011 that celebrate the 25th anniversary of Ironbridge Gorge's selection as one of the first UNESCO World Heritage Sites in Britain.