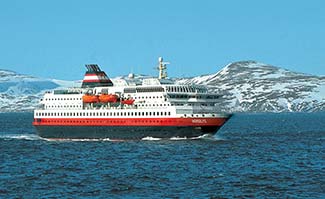 ABOVE: Hurtigruten's Nordlys on a fire-free day.

Two crew members were killed during an engine-room fire on the Nordkapp, a Hurtigruten cruise ferry ship on Norway's North Cape route. According to a news report in London's Telegraph, the ship was near Ålesund when the fire started, which made it easier to evacuate injured personnel for medical treatment.

Although fires aren't common on passenger ships, they do happen now and then: Several large cruise ships have had fires in recent years, and we once traveled on a Scandinavian car-passenger ferry that had been damaged by fire after a passenger fell asleep while smoking.

For an analysis of fire danger at sea, see Jane Archer's "Hurtigruten fire: how safe is your cruise?" column at Telegraph.co.uk. (One thing to keep in mind: Hurtigruten's ships provide a daily service year-round on Norway's North Cape route, and the company runs cruises to such far-flung locations as Spitsbergen and Antarctica. Its ships have an excellent safety record, so the odds that you'll get caught in a conflagration are remote.)

Finally, here are two videos of the Nordlys incident. The first shows the Nordlys on fire and arriving in Ålesund, while the second shows a fire victim and passengers being taken ashore by tender before the ship's arrival at the pier:

This only happen in Nordic and british countries an to greeks(Heral of Free Enterprise, Stonia, Scandinavian Star...) . Greeks: Santorini Diamond.
You shoud keep the vessels in a much better condition.