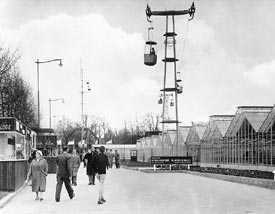 ABOVE: A photo from the 1960 edition of Floriade, which was the first of Holland's once-in-a-decade international horticultural expositions.

Next year will bring the sixth edition of Floriade, an international flower and cultural exposition that takes place in a different location within the Netherlands every 10 years. More than 3 million visitors attended the last Floriade in 2002, and 2012's show (which will be in the Venlo district of the Netherlands, near the country's border with Germany) promises to be another massively-popular event.

Uniworld Boutique River Cruises is capitalizing on Floriade 2012 with two new itineraries that include visits to the exposition:

"Gems of Germany, Belgium & the Netherlands with Floriade" is a 7-night cruise from Brussels to Cologne or vice versa, with weekly departures from April 1 to early September.

"Grand Treasures of Europe" is a 14-night cruise from Brussels to Prague or vice versa, augmented by two nights at a hotel in Prague. The company is offering 11 departures from April 22 until early September.

The ship for both itineraries is Uniworld's River Ambassador, which was overhauled in 2011 and accommodates 120 passengers in 56 staterooms.

For more information on the cruises, visit www.uniworld.com. To learn more about the 2012 horticultural exposition, see our Floriade 2012 article at Europeforvisitors.com.