Home Archives & Categories Europe for Visitors Europe for Cruisers
Costa Magica in Savona, Italy
Oxford opens its cloisters to adult students from the UK and abroad 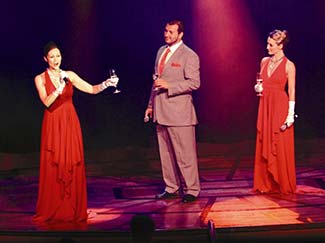 Production shows are a staple of cruise-ship entertainment, to the point where they've become a cliché. And let's face it: Compared to a full-fledged theatrical production, the average show on a cruise ship is like a high-school production of Grease with a smaller (albeit more professional) cast.

To their credit, the entertainment planners at Silversea Cruises have decided to ditch the ersatz Broadway approach in favor of a format that's better suited to its intimate, luxurious ships:

Over the next few months, they're rolling out a new "concert-style concept" with classically-trained vocalists and musicians. Musical styles range "from Motown to opera to pop and rock." (Silversea's press release doesn't mention country-western, so Grand Ole Opry fans may need to bring their iPods.)

And get this: If you think luxury cruise ships are stuffy, think again. Silversea's press release describes a show titled "Fabbalicious" that recreates the sound and look of ABBA:

"Designed to get the audience to their feet, singing and dancing along with the cast, the show celebrates what is arguably the most infectious and fun music of our time."

Silversea's new shows are being produced by Choozi Entertainment, which creates and directs live stage shows around the world.

For more information about the musical themes, producers, and performers, read the Silversea press release.

To learn more about Silversea, its ships, and its European cruise itineraries, visit www.silversea.com.