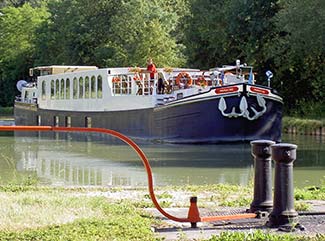 ABOVE: The hotel barge Panache on a French canal.

European Waterways Ltd. offers luxury barge vacation in France, Italy, Scotland, Ireland, England, Germany, and the Benelux countries. In 2012, the company will be operating a new vessel: Panache, a 12-passenger barge of classic Dutch design. The barge has six air-conditioned junior suites, a small heated pool, bicycles for use by passengers, and a crew of five (including a master chef).

Panache will begin its inaugural season with spring "Tulip cruises" in Holland, featuring shore excursions to Keukenhof Gardens and the city of Delft. (The cruises will include optional side trips to Floriade 2012, the once-in-a-decade World Horticultural Expo in the Venlo region of the Netherlands.)

Later in the season, Panache will move to Alsace-Lorrane for a series of cruises on scenic waterways between Nancy and Strasbourg.

We haven't seen Panache (except in the photograph above), but we did spend an enjoyable week aboard another European Waterways luxury barge, La Renaissance, in 2008. See our in-depth review, "A Barge Cruise in France," at Europeforcruisers.com.

For more information on the new barge, go to the Panache pages at the European Waterways Ltd. Web site.

Note: Panache and other European Waterways barges are available for whole-boat charters, with discounts for whole-boat bookings before January 6, 2012.