Viking Ocean Cruises: from rivers to the deep blue sea ABOVE: A Viking river vessel on the Rhône.

Viking River Cruises is already the biggest operator of its kind, with a fleet of 23 river vessels and eight more "Viking Longships" on the way. Not content to rest on its laurels, the company is adding a deepwater brand, Viking Ocean Cruises, and two ships are already on order with an option for a third vessel.

According to sources within the travel industry, the ships will cruise mostly in the Mediterranean and are designed to provide a more intimate and destination-focused cruising experience than megaships of mainstream cruise lines do.

Viking will have plenty of competition in the small- to mid-size ship category, with lines such as Silversea, Seabourn, SeaDream, Oceania, Azamara, Windstar, Star Clippers, and Regent Seven Seas Cruises already serving the American, British, and Australian clientele that Viking Ocean Cruises will be targeting. Several large-ship lines, including Holland America and P&O, also have smaller vessels in their fleets.

Still, the CEO of Viking--Torstein Hagen--obviously thinks that his company's large existing customer base will be open to trying the new Viking Ocean Cruises brand.

Itineraries for Viking's oceangoing cruise ships haven't been announced, and the domain vikingoceancruises.com redirects to the existing Viking River Cruises site. Once the line is open for business, we'll report the news here and add Viking Ocean Cruises to our European Cruise Guide at Europe for Cruisers.

COSTA MAGICA in the Western Mediterranean 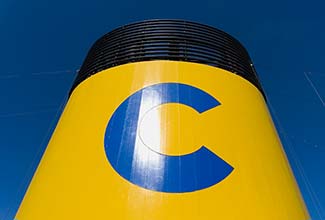 ABOVE: Costa Cruises was once named "Linea C," and the "C" is still used on the cruise line's funnels.

We recently published a 10-page review of a Costa Magica roundtrip cruise from Rome at Europe for Cruisers. Ports of call included Naples, Palma de Mallorca, Valencia, Marseille, and Savona (on the Italian Riviera).

The review is accompanied by a 51-page photo gallery that includes several hundred captioned pictures from the trip.

If you're interested in affordable European cruising with a multinational crowd, Costa and its main Italian rival, MSC, are two lines worth considering.

In addition to offering cruise itineraries throughout Europe, both lines operate convenient roundtrip cruises from Civitavecchia (the port for Rome) and Venice. What's more, passengers can board or disembark from those roundtrip cruises at several different ports along the way.

A suitcase takes a trip with Delta Air Lines

We learned about this video from Tnooz (a travel-technology site) and thought it was worth sharing. In the video, a suitcase is equipped with a TV camera and sent on its way from a Delta Air Lines check-in counter in Atlanta to a luggage carousel in New York: