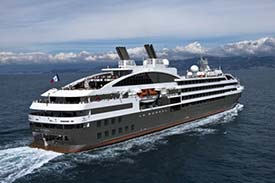 ABOVE: L'Austral is a 264-passenger megayacht that caters to a French- and English-speaking clientele.

Compagnie du Ponant, a French cruise line that serves the small-ship luxury market, is combining music with maritime pursuits during its 2012 summer and fall season. This year's musical cruises include such themes as "Magic Platters," "Mamma Mia!" (in French), chamber music, and opera.

Although Compagnie du Ponant is based in Marseille, the company has an international following, and most of the line's cruise staff are fluent in both French and English.

We'll be publishing a first-hand report on an Adriatic cruise with L'Austral later in the summer, but in the meantime, you can learn about Compagnie du Ponant and its cruises (including advance-purchase discounts and other special offers) at www.ponant.com.