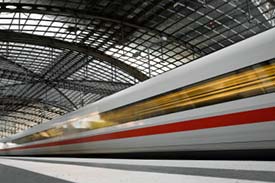 PHOTO: Until BER opens next year, you can fly into Berlin Schönefeld or Tegel, or--better yet--arrive by train.

We just got word from visitBerlin that new Berlin Brandenburg Airport (BER) will open for business on March 17, 2013--ten months after the previously-announced opening date of June 3, 2012. Why? Reportedly, the airport must pass "safety tests" before it begins commercial flight operations.

Berlin's tourism officials describe the delay as "surprising and annoying." Still, the existing Berlin airports at Schönefeld and Tegel will continue operating as before, and the extended summer flight schedules of the three largest airlines serving Berlin (Air Berlin, Lufthansa, and EasyJet) are being maintained. VisitBerlin does concede that the postponement of BER's opening could lead to "delays in airlines committing to new intercontinental routes."