Our vote for "Best Breads at Sea": Compagnie du Ponant 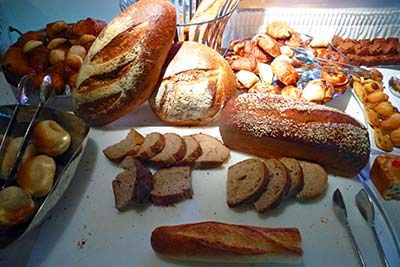 ABOVE: A selection of breakfast breads on Compagnie du Ponant's L'Austral.

Okay, we haven't sampled the breads on every cruise line, but we've gnawed our way through loaves and rolls on plenty of ships since we first went to sea as children. And after decades of bread-eating on vessels that have ranged from Navy ships to the S.S. France to modern luxury cruise liners, we'd have to give our personal "Best Breads at Sea" award to Compagnie du Ponant.

On a recent roundtrip cruise from Venice on Compagnie du Ponant's L'Austral, we were blown away by the quality of breads from the ship's boulanger, Mathieu Flaugier. The crusty peasant loaves and the brioche loaf served at breakfast were especially delectable--and all the more impressive for having been baked at sea, where conditions are seldom optimal for producing first-rate loaves and rolls.

We'll be publishing an in-depth review of our L'Austral cruise later this summer, but in the meantime, we'd like to commend M. Flaugier and Compagnie du Ponant for proving that artisanal baking has a place at sea.

BELOW: Durant longs for a loaf from L'Austral during a port call in Rab, Croatia. 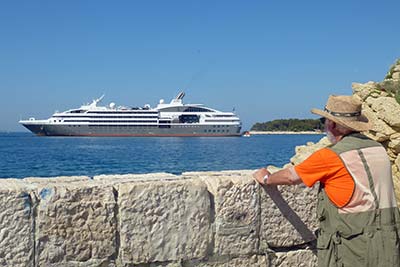