More chaos and confusion at U.S. customs and immigration 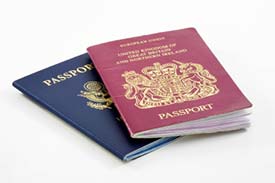 ABOVE: Will a valid passport get you into the United States.? Maybe--or maybe not.

In early October, we flew from Paris to the United States, arriving at Minneapolis-St. Paul Airport (MSP). We expected the usual long lines at Customs and Immigration, but on this occasion, the chaos and confusion were even worse than usual: Officers of CBP (Customs and Border Protection) were shouting at travelers, warning that they'd need to show both a "secondary photo ID" and boarding passes along with their passports.

When we finally got to the head of the line, we asked the CBP officer if this was a new requirement. He answered "yes," and he explained that the new procedure stemmed from the fact that "our enemies" had learned to copy U.S. passports, which were "the most easily-forged passports in the world."

The officer then made a show of holding up our passports and secondary IDs and comparing them, even though he'd already expressed his contempt for drivers' licenses, which anyone could buy "on the street."

We managed to get through immigration, and after we got home, I scoured the U.S. Customs and Border Protection Web site in search of information on the new "secondary photo ID" policy. When I couldn't find anything, I e-mailed the CBP's press department. Today, I got the following reply from a press officer named Cherise M. Miles:

"There are no new requirements or changes to the U.S. Customs and Border Protection inspectional procedures. During arrival processing, CBP officers may request additional forms of identification for verification purposes."

So what's the explanation? Did a rogue CBP supervisor at Minneapolis-St. Paul Airport decide, without consulting higher-ups, that requiring a secondary (and unreliable) photo ID and boarding pass would help to keep "our enemies" out of the country? CBP isn't saying. Still, if you're traveling to the United States from overseas, it might be a good idea to bring along a secondary photo ID and keep your boarding pass handy when you're arriving at a U.S. international air gateway. And be sure to allow plenty of time for connections: We had to stand in two long, slow-moving lines at MSP on October 1--the first to get through immigration, and the second to hand in our customs forms as we left the immigration and customs area.