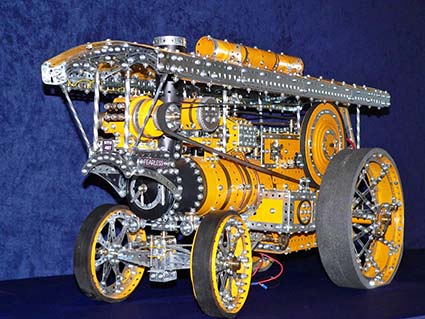 ABOVE: A Meccano model of a Burrell locomotive by Dave Harvey. According to a description at Dalefield.com, the model weighs about 30 lb (13.5 Kb), has two drive speeds and a differential, and took some 500 hours to build. You can see it on February 9 at Enginuity in Shropshire.

The Meccano system, known in the USA as "Erector Set," has had a cult following among modelers since Frank Hornby of Liverpool, England invented Meccano in 1901. The system, which remains in production, includes girders, strips, plates, shafts, gears, pulleys, and other items that can be used to assemble anything from a simple children's toy to large working models with moving parts.

Meccano is no longer the household name that it once was (Lego is better known among today's young model builders), but it continues to attract homegrown engineers--especially those with a taste for nostalgia.

Enginuity, one of the ten Ironbridge Gorge Museums in Shropshire, England, will be featuring a display of Meccano models from 10 a.m. to 5 p.m. on Saturday, the 9th of February.

The models include cranes, cars, clocks, trains, and many "quirky inventions." Some of the models contain vintage parts that are well over a hundred years old, and which are compatible with today's Meccano pieces.

Admission to the Meccano exhibition is included in the normal Enginuity admission fee, or with an Annual Passport Ticket which is valid for 12 months of unlimited visits to all 10 Ironbridge Gorge Museums.

For more information, contact the Ironbridge Tourist Information Centre at 01952 433 424 or visit www.ironbridge.org.uk.

To learn more about the Telford and Ironbridge Meccano Society, which meets at Enguinity and is organizing the display, see www.tims.org.uk.

Posted at 10:14 PM in Destinations, Events and festivals | Permalink | Comments (0)