Need a Starbucks fix in Switzerland? Take the train. 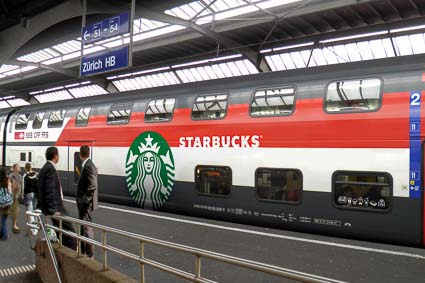 ABOVE: A "Starbucks on Rails" car in Zürich's Hauptbahnhof. INSET BELOW: A Starbucks barista strikes a pose during a press preview. 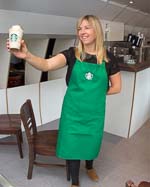 The next time you feel a craving for caffeine as you're traveling across Switzerland, you may be able to get a Starbucks fix without leaping off the train.

According to the Swiss Travel System, the Swiss Federal Railways (SBB CFF FSS), will launch a "Starbucks on Rails" car as a pilot project on the Geneva-St. Gallen-Geneva route in fall, 2013. A Second Starbucks on Rails will be added to the same route in spring, 2014.

The test phase will last for nine months, with the Starbucks cars operating twice a day in each direction. Passengers will be able to eat and drink in the rolling restaurant or take coffee and food back to their seats.

Trivia notes: Switzerland was the site of the first Starbucks in Continental Europe 12 years ago, and all of the high-grade coffee machines used by Starbucks worldwide are manufactured by a Swiss company.

For more information about travel on train, boats, and buses in Switzerland, visit Swisstravelsystem.com. For railway timetables, go to www.sbb.ch.