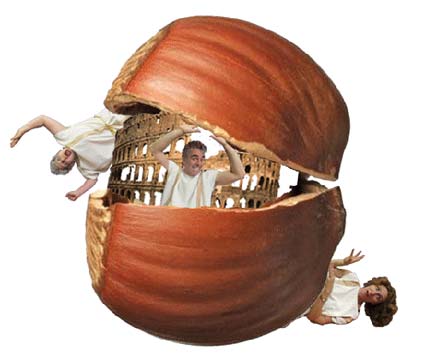 ABOVE: This summer, The Miracle Players are performing Rome in a Nutshell at the Roman Forum.

The Miracle Players have been staging free historical comedies at the Roman Forum since 1999. This summer, the English-language theatre troupe is offering Rome in a Nutshell, subtitled "From the Founding to the Fall of the Ancient Roman Empire in 40 minutes of comic theatre."

Rome in a Nutshell is the name of the play,
As you know, Rome wasn't built in a day.
Three actors and a little rhyme,
Take you on a journey through time.

The show, which has the official backing of Comune di Roma, takes place every Friday from now through August 2, 2013 at 7:30 p.m. sharp.

Bring something to sit on if your backside lacks cushioning, and arrive at least 15 minutes early if you can. (Admission is free, and you don't need tickets or reservations.)

For information, including detailed directions, visit the Rome in a Nutshell pages at the Miracle Players Web site.

For help in planning your trip to Rome, see our Rome for Visitors site.

BELOW: This map indicates the location of Rome in a Nutshell performances. 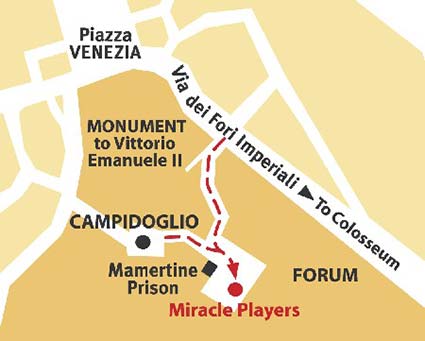 Photo and map: The Miracle Players