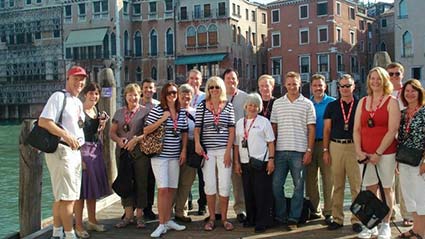 A 'Fondue Carriage Ride' in Bern

Bern Tourismus is promoting a "Fondue Carriage Ride" this winter.

For a mere 190 Swiss francs, a couple can tour Switzerland's cozy capital in a pedicab or cycle rickshaw (dubbed a "Fonduekscha") while noshing on cheese fondue and white wine. (Singles pay 160 francs, so if you're traveling alone, you might as well save money by hooking up with a fellow fondue fan at your hotel or hostel.)

The 60- to 90-minute tours operate from 9 a.m. to 9 p.m. daily, with late-night departures available on request.

The video below, which is narrated in Bernese dialect, shows what to expect during your tour. For details, or to book a tour, visit the "Fondue Carriage Ride" page at Bern's English-language tourism site. 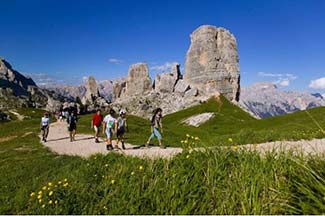 ABOVE: A summer hike in Italy's photogenic Dolomites.

Dolomite Mountains srl, a tour company based in Livinallongo del Col di Lana, Italy, is offering photo and video safari tours in the summer of 2011.

Photography and Creativity in the Italian Alps: An Artistic Journey into the Heart of the Dolomites is an 8-day/7-night itinerary that runs from June 27 to July 4.

After arriving at Venice Airport, the dozen participants will spend a week walking and working with fine-art photographer Randy Jay Braun and local legend Karin Pizzinini, a multilingual photographer, trail guide, and alpinist. A third instructor will be Julieanne Kost, Adobe's senior digital imaging expert for Lightroom and Photoshop.

Val Gardena, a working farm in the Ladino, high mountain villages, and chairlift rides to displays of alpine flowers are a few of many photo opportunities on the tour.

If you prefer moving pictures to stills, you may want to investigate Videography and Creativity in the Italian Alps: A Visual and Spiritual Journey in the Dolomite Mountains, June 13-23. The cost is €4,650 per person, double (single supplement €540).

Dolomite Mountains is a 15-year-old company that offers both escorted and self-guided active trips, luxury tours, and gourmet adventures in the Dolomites of Northeastern Italy. The company has a Web site at www.dolomitemountains.com.